Through New Media program from Astra Film Festival, we went for a ride in the future, and now we’re back with stories.

“I’ve put my finger on the map. Here, and here, these are the portals which could be the future of cinematography.” says Andreea, an amateur of film documentaries from Bucharest. She repeats several times the word “overwhelming” remembering the New Media program from the Festival: The Future is Now.  The two novelty attraction points are creating a new beaten path. In the Large Square, among people and pigeons, it’s built an imposing building with a futuristic look – the dome cinema. At Thalia Hall, in the foyer, at the video bar arranged for the festival, some films can be seen with special virtual reality glasses (VR).

“The immersive cinematography is a stage in the evolution of nonfiction. It marks the transition from representation to experience” intrigues me Adela Munteanu, responsible for New Media program, the new section of the Festival. “The program The Future is Now includes immersive projects with various technologies and products presented on different platforms”, says Adela. “This includes video projects in 360, virtual reality, movies in full-dome format, designed in a dome cinema and recommendations of web documentaries in 360”.

“What I was able to see, I wouldn’t say they were movies. They have been experiences. I felt that I lived, I created my real memories.” This is how Oana describes an immersive documentary, from which she came out excited. In the so-called immersive cinema, you are no longer a spectator with popcorn in your arms, approaching or distancing emotional prejudices and beliefs to some characters, as in traditional cinema. The immersive projects absorb you into the action. You’re one of the characters, you’re a participant in building a subjective experience, choosing where and what to watch. The camera, or the screen that defines your physical space of narrative cinema no longer exits.

Using new technologies, the documentary, which is not the most popular genre of cinema, has a chance to get closer to the public. When gadgets appear and improves so quickly, we’re wondering if the directors will be able to adapt the way they’re build their stories. Will the experiential cinematic language approach the public that is inevitably fascinated by new? Will it connect in a profound way with his fellows and the reality in which he lives?

Dome-cinema: how  is it to be surrounded by film?

Installed in the center of Sibiu, the white hemisphere arouses curiosity and general amazement. The dome-cinema seems a sort of symbol for the film documentary crowd. Even if you hurry, passing the dome, you slow down the pace, intrigued.

“The gigantic sphere caught my attention. I was making jokes that the aliens put their tent in Sibiu. But the next day I was in front of it with a ticket “Adrian laughs, rushed to enter the dome-cinema.

In Sibiu and Romania the dome-cinema came for the first time, but the concept is not new. The cinema is inspired by Planetariums, where, most often, for educational purposes, on the dome shaped ceiling you can see the planets in their orbits, the sky and celestial bodies. Adapting films in planetariums are offering occasioned moviegoers a new experience. The ceiling becomes the screen and using multiple projectors and sound equipment performance, the film reflects everywhere.

Paulina Majda the director of the full dome format documentary – “Dream of Fly”, included in the special program for children from Astra Film Junior – is proposing an exercise of imagination. “Imagine yourself sitting under a big, black umbrella. You don’t see the world beyond, it’s completely dark. Suddenly, behind your back a big dragon flies by above your head so you can almost feel he touches your head. You didn’t expect him at all. The visual and sound experiences under the dome are much stronger then in traditional cinema. They involve you in movie action differently and from various sides: back, right, left, top. Some people say they have three-dimensional impressions and you don’t need to wear 3D glasses to feel it.”

With this picture in mind, the hemispherical dome opens through a long hallway, which reinforces the feeling of your portal. “I felt like I’m changing dimensions” says Delia smiling. Inside, there’s room enough for 180 people. Children, seated comfortably on cushions, face up and adults entertained, look around for the sky.

Dome closes the audience in an enormous bubble , the viewing becomes a shared experience. The emotions transmitted in that environment are contagious, “feels some sort of connection.” Delia tells me. She took three tickets, but what she saw so far the most impressive was “The Longest Night: A Winter’s Tale.” A combination of animation and filming handled by puppeteers designed in fulldome format; “Two old woman and a child in a small village in the mountains, carrying with them stories about dragons and kings. It seems to be just a northern legend. Beautiful!”

Through VR glasses: movies as experiences

The dome and Thalia Hall are only steps away, long enough to remember the news about the world’s first immersive theaters. In Amsterdam, you can buy your ticket to movies exclusively in VR with 14 euros.

For now, we don’t have such cinemas, but we have the tickets from previous projections which happened at Astra Film. It cost 8 lei. It allowed access to the set of virtual reality glasses Oculus Rift Samsung Gear VR times.

Samsung Gear VR can be used only with a Samsung smartphone, while Oculus Rift requires connection to a powerful computer so the image quality to be the best. The glasses that are incorporated in a headset aren’t anything else other than wide visibility screens, one for each eye. Other devices that are creating virtual reality to match other perceptual senses (touch, smell, taste), have not appeared, yet. However, if the lenses and the headphones are fixed correctly, the immersion experience is overwhelming, “You know how it was?… It’s like I’m telling stories of the seaside to someone that never went there. I can’t describe. I was in the movie, for real. “

Whether you are an active character in the story or just a witness, your experiences are a source for  the environment that you live in. “It’s keeping you captive, even if you do not like the subject. Like in the movie I saw – Giant, a family locked in a cellar, is waiting for the giant which you don’t see, but you can feel his presence. While they spoke scared , you were able avoid the tension, looking around,   focusing on other stuff” shares Sorina after watching the movie” Giant ” (dir. Milica Zec), a virtual experience that allows you to live the war, as a family from Serbia felt it.

The male voice of a couple, Alex, tells me that they tried VR, watching the movie “6×9: A Virtual Experience of Solitary Confinement ” (dir. Francesca Panetta, Lindsay Poulton). “Awesome 6×9! It is about seven former US prisoners and their life in prison cells. It’s a little bit weird the fact that you have to put the glasses on to understand that they are actual people just like you, real people. Even now I remember the cracks on the cell walls. I still feel that cold, I even feel claustrophobic.”

I also ran into skeptics, who see VR another “commercial figment” that is “cool” and educational, but not essential to enjoy a good movie. Some mention the discomfort of holding VR goggles on  their head for hours. Others, excited more or less, remember the presence of super violent images that seen with VR are ” turning your stomach inside out.”

Ozana Nicolau, young film director, tells me that for her VR was a complete experience. “I feel like  it’s surpassing the 3D cinema. It’s immersing you in a complete world from sound, to image point of view. It’s a very effective instrument to express moods, more than just ideas or concepts, it helps you to experiment. The documentary Ozana saw “Notes on Blindness – A Journey Into a World Beyond Sight” (dir. Peter Middleton, James Spinney ) seemed extremely good. “If you walk from the very beginning to the end of it, every stage really gives you the idea of what it’s like to live without sight.”

The future of today and tomorrow: Challenges and predictions

This immersive cinema discovers a huge creative space. The filmmakers which are exploring this area are bringing up many dilemmas and challenges. “Besides some technical challenges and the small budgets generally available for making fulldome content, I would say that the biggest challenge lies in the fact that a fulldome director has less tools in his toolbox to make sure that the viewers see exactly what the he wants them to see, than a director of regular content has. In a way, with immersive content like fulldome film, the viewer partly takes over the role of the director. Each viewer will approach that aspect of consuming the film a bit different. So, the director has to trust his audience to pick out the important bits of the film, without limiting the immersive experience too much”, says Peter Geerts, director of the documentary “World 2 War”.

Paulina Majda, who has experience making films in both traditional and full dome format, stresses about how important it is to understand technologies that work every time and try put yourself in the shoes of the audience. Achieving public empathy without generating negative emotions that would cause any kind of trauma is a challenge for the directors. “When I am working on Fulldome film, first of all, I think about the audience and how do people feel – good, bad, immersed enough? I try to predict the audience impressions. I’ve never practiced this in traditional cinema and it’s very interesting for myself personally. The immersive cinema is an empathy machine not only for people but also for creators.”

I’m passing through the interactive Astra Film documentaries and I’m realizing that “the future is now”, as proposed by the festival organizers, it starts getting contours, but it is only a small part of the immersive cinema potential. Where are we heading to? Are we visualizing the horizons of tomorrow’s movies?

Cinema of tomorrow will be a “a machine to more truly understand things and learn things”. It’s sketching out some prophetic thoughts – Robin Sip (CEO of the Dutch company Mirage3D, director of “Life under the Arctic Sky”). “A next step in creating experiences for VR films would be to create a real-time generated film, where the viewer can actually look behind an object by moving his/her head or even walk around in the scene and play an active part in the film, perhaps even influence the story, by actually being one of the protagonists. These real time films will be mostly based on game engines (not pre-rendered animation or live action footage) and will really require a whole new cinematographic language. In the near future A.I. will be have to be merged with V.R. to get the ultimate experience.”

Micro-Folie – the museum as a living space. Interview with Rebecca Bouillou

The Chernobyl Lie. Travelling Back in Time 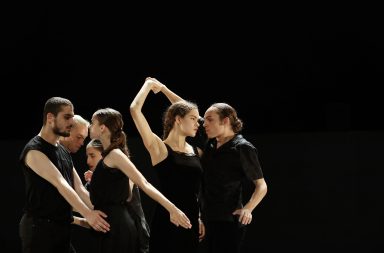